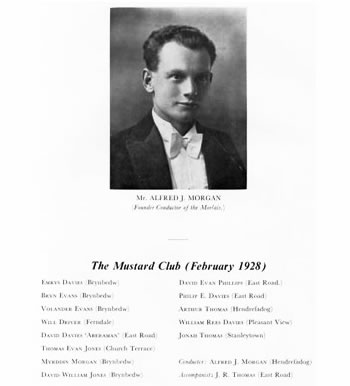 Côr Meibion Morlais traces its history back to February 1928 when Mr Alfred Morgan staged an evening of entertainment at Ebenezer Chapel, Tylorstown, Rhondda, with a group of a dozen singers calling themselves the Mustard Club.

Such was the success of the Mustard Club concert that “Alfie” Morgan decided to constitute his singers as a permanent Choir, choosing the name “Morlais Glee Singers”, which remained in use until 1970 when we adopted the title Côr Meibion Morlais.

Under the direction of Alfie Morgan, the Morlais established twin traditions of innovation and success, traditions which have continued to this day. By 1931 the new Choir was winning prizes at Eisteddfodau and was in great demand throughout Wales and southern England. Then, in 1932, the Choir began a series of Annual Concerts in Ferndale with principal solo artists of international repute – Dame Gwyneth Jones, Heddle Nash and Stuart Burrows to name just three. The Morlais Annual Concerts have continued without a break to this day.

Alfie Morgan moved away from the Rhondda in 1939 and the conductor’s baton was taken up first of all by Trevor Lewis (1939-56), then by Trefor Jeffery (1957-80), Neil Johnson (1981-5) and John Asquith (1986- ). The Choir managed to keep going throughout World War II, and in the post war period was able to undertake engagements as diverse as the 1951 Pageant of Wales and a concert for the inmates of Cardiff gaol later the same year!

In 1962, the Morlais visited Stuttgart on the first of a long succession of overseas tours. At the end of the final concert in Stuttgart’s Liederhalle, the South German Association of Choirs presented the Morlais with the Wilhelm Nagel Medal, an award for outstanding levels of performance: it hangs in the Morlais Hall still.

Beginning in 1978, Côr Meibion Morlais organised annual Gala Days in Ferndale’s spectacular Darren Park. Not only did the Morlais Galas help raise funds for the Choir, they also provided immensely enjoyable days out for the people of Ferndale. Sadly the spiralling cost of staging events of this kind meant that the Galas were discontinued after 1991.

In 1981 the Choir purchased the disused North Road English Congregational Chapel in Ferndale and turned it into rehearsal premises. A great deal of work needed to be done to make the building serviceable and it was not until June 1982 that the Choir was able to move in. The building was then re-named the “Morlais Hall” and has gone on to become an invaluable resource for many local groups and associations in the area. For the Choir, the Hall is a permanent home for rehearsals and small concerts, and also a place to welcome visiting musicians, most recently the Russian State Cossack Song and Dance Ensemble and the Coro Cum Jubilo from northern Spain.

In 2010-2011 the Morlais received from the Welsh Government’s Heads of the Valleys Fund a substantial grant towards the cost of refurbishing the Morlais Hall, which has been transformed into a light and airy, modern concert hall, together with a meeting room, kitchen and music library under the same roof. The building is used by many local organisations on a regular basis and the new technical facilities, including contemporary sound and lighting equipment, have also made it possible for the Hall to become home to the highly successful Rhondda Stage School for Young People.

Over the years Côr Meibion Morlais has been fortunate to recruit enthusiastic and loyal choristers who have ensured the choir’s survival through tumultuous decades of unemployment, war and social change. Fashions in music come and go, but the thread of enjoyment and fulfillment has never broken, and is as strong as ever as we face the challenges of the future: this is one history which is far from over!

And new members are ALWAYS WELCOME!