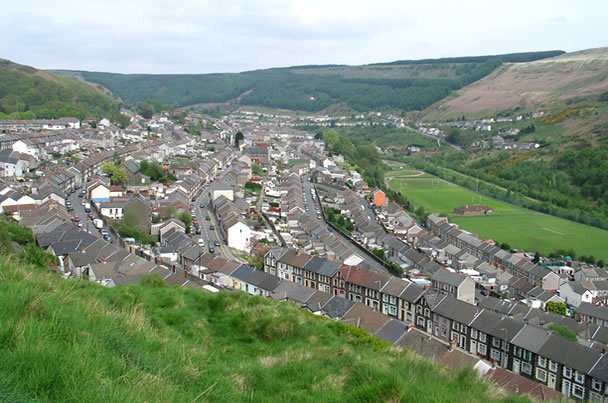 Côr Meibion Morlais is based in the village of Ferndale (Welsh “Glynrhedynog”) in the famous Rhondda Valleys of Wales. With a population of around 5,000, Ferndale lies nearly 300 metres (950 feet) above sea-level on a ledge above the valley floor, overshadowed by woods and steep cliffs. The town grew up around the coal mines which, from the mid-nineteenth century onwards, exploited the rich vein of steam coal found deep beneath the ground.

The mines are now long closed and nature has reclaimed this wild and beautiful area. In a wood at the top of the town are the icy waters of Llyn-y-forwyn, “the Maiden’s Pool”, famed in Welsh myth as the home of a strange enchantress. Fed by underground streams, the lake lies in a fissure in the mountain and is of immense depth, whilst above the trees and cliffs lie the ridges of the plateau where cloud shadows swing over miles of springy grass and heather, and solitude is total.

On these hills are many historic remains from Iron Age tumuli to a Roman encampment, whilst at nearby Llanwynno a sixth century stone cross is embedded in the church wall, but it was the great coal boom which brought industrial workers and their families to Ferndale and its suburb of Blaenllechau across the valley.

The concentration of population allowed the people of the Valleys to channel their musical energies into choral singing, an art at which the Welsh nation, with ancient traditions of singing in harmony, excels. In the development of choral singing, the various non-Conformist sects played a pivotal role: Methodists, Baptists, Congregationalists, Independents and Calvinistics all had their own chapels and their own choirs. They vied with each other to produce the best performances of sacred music, and to organise huge hymn singing festivals (“cymanfaoedd ganu”) where most of the congregation are seated according to voice – soprano, alto, tenor and bass – to sing the great Welsh hymns: words penned by Wales’ finest Romantic poets, full of fervour and vivid, alliterative power, all underscored by the minor key harmonies of a people for whom singing was, and is, a talisman of nationhood.

The Chapel congregations have dwindled now, but the singing tradition remains, albeit with a much wider and modern repertoire. Singing is thus a living tradition, a part of the life of our town, our valley, and our country which, by its adaptability and world-wide appeal, forms a bridge between Wales and the World beyond our mountain ridges and encircling seas.