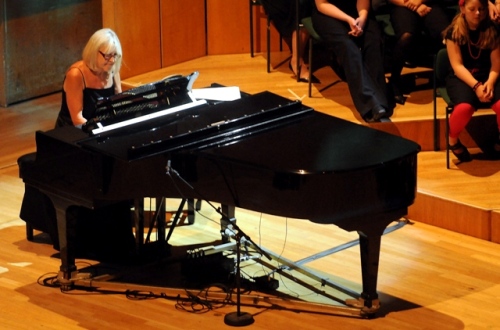 After studying for four years at the Welsh College of Music and Drama in Cardiff, Rosalie moved to London where she enjoyed a period of collaboration with a number of the capital’s ballet companies for whom she composed several three-act scores.

Returning to Wales, Rosalie found fame as accompanist, teacher and repetiteur, and as a freelance pianist with the Royal Academy of Dance.  Rosalie also worked with Welsh National Opera’s MAX Department as accompanist for the Singing Club, training young singers to perform works in a wide variety of styles.

She had played for the Morlais on previous concert tours, and in 1999 returned to the choir as our permanent accompanist, a post she had previously held from 1982 to 1989.

Rosalie enjoyed writing accompaniments for the choir, and also working with choir soloists to improve standards of performance.

She also arranged music for, and accompanied the No Recourse Choir which was set up in Cardiff in 2013 by the Black and Asian Women Step Out (BAWSO) association.

Rosalie was a native of Rhondda and lived in Pontygwaith.

Sadly, Roz passed away on December 1st 2015 after being diagnosed with terminal cancer only a few short weeks previously. Roz will never be forgotten, and is sorely missed by everyone who was fortunate enough to know her.
Rest In Peace Roz.