Since 1986 the Choir has been conducted by John Asquith, who studied Modern Languages at Oxford and in Saint Petersburg (Leningrad), specialising in Russian and French with Welsh.

John has always maintained a keen interest in music, especially singing, and is an expert on 19th century Russian opera. He sang bass in the Oxford University Russian Choir, the London Welsh Chorale and the London Welsh Festival Choir, and then baritone with London’s Côr Meibion Gwalia before joining the Morlais as a baritone when he moved from London to the village of Blaenllechau, near Ferndale, in 1984. In January 1986 he was appointed Conductor of Côr Morlais, his first task being to prepare the choir for a one-week tour to France a few months later.

In 1997 he resigned a career in national and local government to pursue his twin passions of languages and opera. Since 2003, John has been Russian Coach for Welsh National Opera’s highly acclaimed Russian Season, working on various operas by Tchaikovsky, including the award-winning production of Mazepa, as well as concert excerpts from Mussorgsky’s “Boris Godunov”. He also prepares singers for Russian roles in Europe and America and coached in Russian at the Cardiff International Academy of Voice. 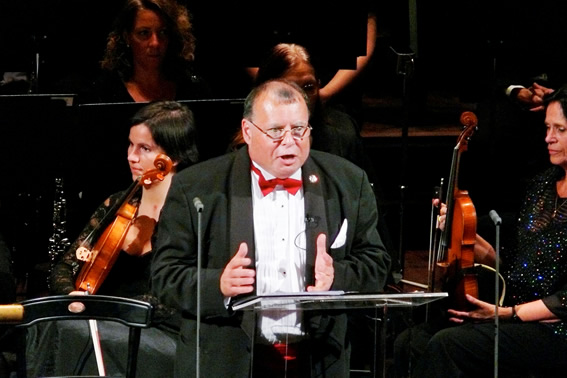 John Asquith: The Bards of Wales at the Liszt Academy Hall, Budapest 2014.

As a freelance choral conductor John has worked in Poland, Russia and Argentina. Since 2009 he has also worked on a Hungarian project based around a cantata by Karl Jenkins which sets to music the Hungarian epic poem “A Walesi Bárdok” (“The Bards of Wales”), appearing at the world premiere of the “Bards” in Budapest in 2011 and most recently performing in Rumania, in the USA (New York) and at the Great Hall of the Liszt Academy in Budapest.

John is equally at home as Conductor and Speaker: his fine bass voice and command of languages have allowed him to establish a good-humoured rapport with audiences in many countries, including recording voiceovers for the Royal Nova Scotia International Tattoo, speaking to packed venues in St Petersburg, Moscow, Budapest, Prague and Buenos Aires in Russian, Hungarian, Czech and Spanish, and compering a concert by the Russian State Cossack Ensemble in Treorci tri-lingually in Russian, Welsh and English.