The first of our monthly Featured Choristers is Ray Condon. 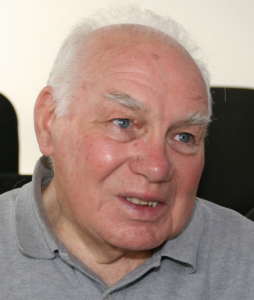 Ray joined Côr Meibion Morlais in 1954 at the age of 18.  The conductor at that time was Mr Trefor Lewis, a teacher by profession, who Ray describes as a “great conductor” and a “stern man” who “scared me to death“.

The first Côr Meibion Morlais Annual Concert that Ray performed in took place in the Welfare Hall in Tylorstown in 1955.

Ray was called up for National Service from January 1957 to December 1958 and spent most of this time in Singapore.  On his return he was warmly welcomed back into a much changed Côr Meibion Morlais with a new conductor, Mr Trevor Jeffrey, and many new choristers.

Ray recalls that “the 60’s was a very successful decade for us with many eisteddfod wins, radio and TV appearances, buying our first Hall, the first foreign tour to Stuttgart, and the Choir’s first set of Dress Suits.  Looking back, the list seems endless.” 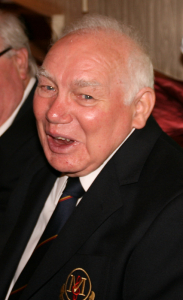 Among the many Côr Meibion Morlais highlights that Ray has been part of over the years are the 50 Years celebration in 1978, the Torquay Holiday, the Choir’s tour of America and Canada in 1996, and the visit to Canada in 2006 to take part in the Royal Nova Scotia Tattoo in Halifax.

As such a long-standing chorister, Ray has probably sung every song that the Choir has ever performed.  Whenever the Choir attends a Wedding or Funeral (where someone else has picked what we have to sing) Ray is about the only Chorister who always knows the tune to even the most obscure of hymns, and more often than not, the words too!

Ray was the Chairman of the Choir’s committee from 1999 to 2001, and at 79 years young, he can look back on over 60 years of “fun, friendship and camaraderie” which he sums up with the following words:
“The faces change but the Morlais stays unchangeable.“