Our Summer concert on Friday evening at The Morlais Hall was another sell-out event.  As our conductor, John Asquith, was still recovering from his recent operation Roz was both Accompanist and Conductor for this concert and she certainly earned her post-concert glass of wine!.

Our Special Guest Artistes on this occasion were the NO RECOURSE Ladies Choir from Cardiff.

The NO RECOURSE choir was started by BAWSO – a support organisation for Black and Minority Ethnic (BME) women who have suffered abuse – as a fund raising initiative because the women they are supporting have ‘No Recourse’ to government funding.
By pure coinidence, the Musical director of the NO RECOURSE choir is John Asquith, and the Accompanist is Roz Evans.

Both Choirs performed a selection from their individual repertoires, as well as the joint item A World Of Our Own by T Springfield. 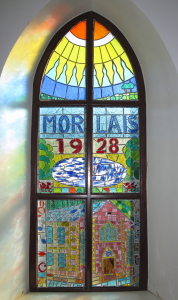 The Choir Chairman, Nigel Morgan, took this opportunity to draw the audience’s attention to our recently added stained glass window, upstairs at the front of the Hall.

The window was donated to The Choir by Mr Ronnie James, the brother-in-law of a member of our top tenor section, Allyn Carter.  The entire creation is all Ronnie’s – the initial idea, the design, the fabrication and the installation.

He had the idea for adding a feature window during the recent restoration and refurbishment of the Morlais Hall back in 2011.   The design is intended to incorporate all aspects of Ferndale life, including the Darran Park lake, the trees and the mountainside overlooking the village, the clear blue sky and glorious sunshine that continually graces our South Wales valley, and of course, The Morlais Hall itself.

Nigel formally thanked Ronnie for his donation of the stained glass window to the Choir and, as a small token of our gratitude, presented him with a copy of the Choir book, Sea of Voices – The Story of Côr Meibion Morlais.

We look forward to seeing you all there!