Today was a busy day for Côr Meibion Morlais.  After performing at Enid’s 80th Birthday Party earlier this afternoon, we put on our Dress Suits, Bow Ties and Shiny Shoes ready for our 84th Annual Concert this evening at St Dunstan’s Church in Ferndale. 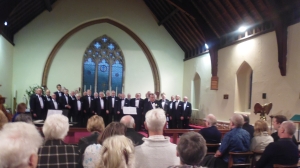 We had a great turn out again this year, singing to a packed St Dunstan’s Church.  Although John was still not fit to conduct us while he’s on the mend after his recent surgery, he was well enough to say a few words of introduction to start off our concert and to introduce our very own Rosalie Evans as Conductor for the evening in his stead, with Mr Johnathan Gulliford – the musical director of Côr Meibion Pontypridd – taking Roz’s usual place at the piano.

As well as a selection of familiar favourites from our ever growing repertoire, such as The Rose, Yr Anthem Geltaidd, Yfory, and Llanfair, to name just a few, we also introduced some new items we’ve been learning recently and have not sung in concerts before including Ar Hyd Y Nos, Pan Fo’r Nos Yn Hir, and My Heart Belongs To Daddy (which we learned in the summer and recorded for an episode in the fifth season of Ruth Jones’ hit Welsh Valley’s comedy series STELLA).

Our guests this evening were the stunning piano and flute duo TRANQUILLO with Hannah Mitchell (piano) and Sarah Waycott (flute) playing a selection of classical and modern music.  Although they have previously performed their own recital in the Morlais Hall, and Côr Meibion Morlais has performed with Tonyrefail Ladies Choir which Hannah conducts, this was the first time for TRANQUILLO to be part of one of our own concerts, and they received a well deserved standing ovation from both the choir and the audience for their performance.

At the end of the concert, Côr Meibion Morlais chairman Mr Nigel Morgan acknowledged the efforts of everyone who made our concert tonight the success it was with a presentation of flowers for the ladies and bottles for the men.  Special thanks go to our hard working music team, John Asquith and especially to Roz who is in sole charge of the choir while John is recuperating from his operation.  Also thanks to Mr Jonathan Gulliford for being our substitute accompanist for the evening which left Roz free to conduct tonight’s concert, and of course our appreciation and congratulations to TRANQUILLO for an amazing recital.

Roz finally closed our concert in the traditional way by inviting the audience to join with us in singing the National Anthem, Hen Wlad Fy Nhadau.

Our thanks to everyone who attended our concert tonight and for supporting Côr Meibion Morlais.  We look forward to seeing you all again at our next concert when we’ll be back in our home venue, The Morlais Hall, for our Remembrance Concert on Friday 13th November.