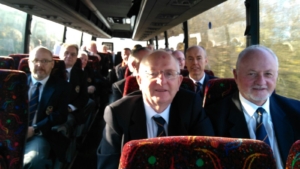 A cold November 26th saw us on the bus to Cardiff where we would be providing pre-match entertainment for the crowd, and also leading the singing of the National Anthems for the Wales -v- South Africa Autumn International game at the home of Welsh rugby, The Principality Stadium in Cardiff. The WRU’s Musical Director, Mr Haydn James, required around 100 voices for the performance so Côr Meibion Morlais joined forces with our nearby neighbours, The Pendyrus Male Voice choir, for this engagement. We were given a list of items that we would be performing which meant that both choirs would need to learn new music as well as new arrangements to songs we already know. Due to the close proximity of our two choirs, it was easy to arrange a number of joint rehearsal sessions to ensure we’d sound like a single choir for the performance.

After a brief rehearsal and some staging instructions (where to line up, where to stand, etc) we formed up on the pitch to sing a number of rousing songs for the assembling crowd, including songs in Welsh, English and Zulu, before leading the singing of both the South African and the Welsh National Anthems immediately before kick-off.

Combined Côr Meibion Morlais and Pendyrus Male Voice singing on the pitch ahead of the Wales -v- South Africa game. 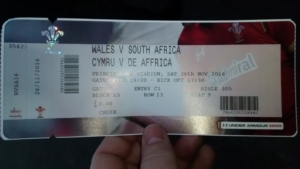 For the choristers, it was a thoroughly enjoyable experience, especially as it included tickets to stay and watch the game, which Wales won 27-13! Hopefully, this won’t be the last time you will see Côr Meibion Morlais performing on the hallowed turf.