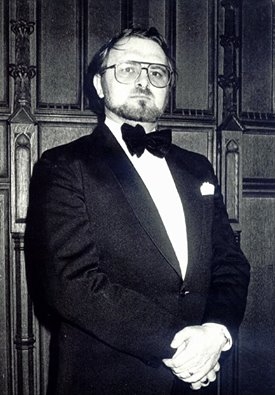 Another sad day for The Morlais with the news that a former Conductor of the choir, Neil Johnson, passed away last Thursday.
Neil took over the baton in October 1980 and remained with the choir until October 1985. A teacher by profession, Neil had previously been associated with Treorchy Male Choir and Treorchy Choral Society.
Neil was at the helm when the choir made the first of many successful visits to France, at the invitation of the Amis du Rhondda, who were based around Tulle in the Correze Region.
The Royal Albert Hall was another first for the Morlais in 1982, as part of 1000 Voices organised by the Welsh Association of Male Choirs.
Another ‘first’ that same year saw us taking ownership of our new rehearsal facility, The Morlais Hall, where remain to this day.
In 1985, Neil was instrumental in preparing the choir for a very busy weekend at the end of August when the choir travelled to the NEC in Birmingham to entertain the delegates and members of BLESMA at their National Convention.
Two days later the choir travelled to the Queen Elizabeth Hall in London to take part in a tribute concert in memory of Paul Robson, sharing the stage with Dame Peggy Ashcroft, Willard White and Elisabeth Welch.

Neil was a part of the Morlais during a busy and exciting time for the choir and we appreciate his friendship and musicianship.
Our thoughts are now with his wife Eleanor and children David and Rachel.